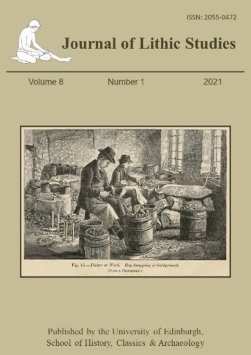 The Vilapedre axe (Lugo, Northwest Iberia) has been traditionally considered by archaeologists as evidence of prehistoric long-distance contacts along the Atlantic Coast of France and Spain. This artefact - as other “Tumiac type” axes (long polished blades, generally butt-perforated) - would have been produced in Brittany during the Neolithic (5th millennium BCE) using jadeitite as raw material, a green-coloured rock for which there are sources in the western Italian Alps. In this paper, we have traced the possible archaeological origin of this artefact back by examining the personal files of one of its first owners, Santiago de la Iglesia. Furthermore, we have conducted a mineralogical (X-Ray Diffraction, XRD) and an elemental analysis (Scanning Electron Microscopy with Energy Dispersive X-ray Detection, SEM-EDX) of both the Vilapedre axe and geological samples from several places at the Alps where prehistoric quarrying of greenstones has been reported. The aims were physicochemically characterizing the axe to provide information about its possible geological source. During our analyses, we have found significant compositional similarities between the Vilapedre axe and one of the geological samples coming from the Alps (Alp06). The results are therefore consistent with the alleged Alpine origin of this artefact. The presence of this axe in Northwest Spain, together with other evidence, such as the presence of objects of Iberian origin in Breton monuments, strongly suggests the existence of contacts between both regions of the Atlantic façade during the Neolithic onwards in which seafaring would undoubtedly have played an important role.