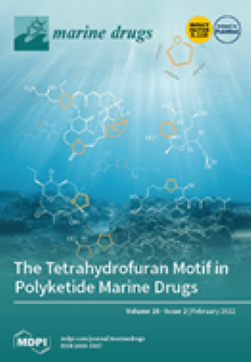 Pigment Composition of Nine Brown Algae from the Iberian Northwestern Coastline: Influence of the Extraction Solvent

Brown algae are ubiquitously distributed in the NW coastline of the Iberian Peninsula, where they stand as an underexploited resource. In this study, five solvents were applied to the extraction of pigments from nine brown algae, followed by their determination and quantification by HPLC-DAD. A total of 13 compounds were detected: Six were identified as chlorophylls, six were classified as xanthophylls, and one compound was reported as a carotene. Fucoxanthin was reported in all extracts, which is the most prominent pigment of these algae. Among them, L. saccharina and U. pinnatifida present the highest concentration of fucoxanthin (4.5–4.7 mg∙g−1 dry weight). Ethanol and acetone were revealed as the most efficient solvents for the extraction of pigments, showing a maximal value of 11.9 mg of total pigments per gram of dry alga obtained from the ethanolic extracts of H. elongata, followed by the acetonic extracts of L. ochroleuca. Indeed, ethanol was also revealed as the most efficient solvent according to its high extraction yield along all species evaluated. Our results supply insights into the pigment composition of brown algae, opening new perspectives on their commercial exploitation by food, pharmaceutical, and cosmeceutical industries.