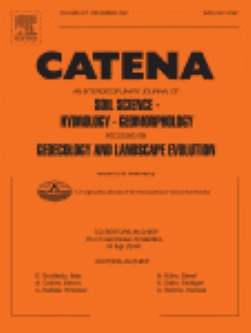 Soils are the main Hg reservoir in the terrestrial ecosystems where it is deposited via wet or dry deposition and litterfall. Once on the soil surface, different biogeochemical routes will determine the fate of Hg and the role of terrestrial ecosystems as a Hg source or sink. The specific chemical and physical characteristics of Podzols and podzolic soils contribute to the accumulation of Hg in their illuvial horizons, avoiding its leaching to groundwater. The geographical location, state of pedogenesis, soil age, abundance of carrier phases and physical properties can affect the presence and distribution of Hg in soils. Therefore, understand and relate these factors with the behavior of Hg in Podzols and podzolic soils is key to define the role of this type of soil in the terrestrial Hg cycle. In this work, ten podzolic soil profiles were collected in an Atlantic coastal forest area of Portugal and analyzed for the main physico-chemical properties and Hg content to assess the influence of the intensity of podzolization in the Hg depth distribution. Three different patterns of Hg distribution in the studied Podzols, depending on the predominance of atmospheric deposition or the intensity of podzolization, have been defined. The pattern I showed the maximum Hg contents in the surface A horizons (12.9–23.5 µg kg− 1 ), pattern II exhibited the highest peaks in the subsurface illuvial horizons (2.3–17.3 µg kg− 1 ) and pattern III presented an even distribution of Hg through the soil profile. We found that dissolved organic matter (DOM) is the main carrier of Hg in the A and E horizons, whereas metal(Al, Fe)-humus complexes and/or oxyhydroxides contribute to immobilizing Hg in the illuvial horizons (Bh, Bs and Bhs). The principal component regression (PCR) analysis predicted satisfactorily the Hg distribution through soil organic matter and Al and Fe oxyhydroxides. The Hg immobilized in the subsurface layers of Podzols is retained in the long term, avoiding its migration to other components of terrestrial ecosystems where it could cause serious environmental damage such as groundwater and superficial waters.