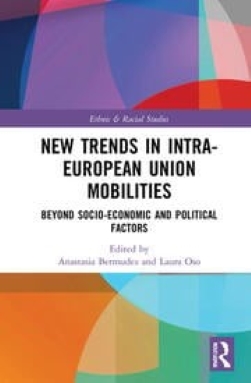 Recent intra-European mobilities can be analysed from the perspective of transformations in the European migration system, especially following the 2008 Great Recession, which requires moving beyond portrayals of such flows as problem-free mobilities resembling “liquid migration”. These include renewed “(semi)periphery–core” movements involving both natives and naturalized migrants that interlink with other migration systems reaching beyond Europe and produce more complex mobilities. Analysis of these mobilities need to consider as well the connections with changes in social protection, gender and citizenship systems, and their intersection with other factors such as class, age, race and ethnicity. The articles in this Special Issue do so by focusing on a variety of cases that encompass quantitative analysis of demographic data for Portugal and Spain as well as qualitative studies of the experiences of recent Spanish, Latin American and Romanian migrants in London, Paris and Brussels, thus providing new insights into current intra-EU mobilities.