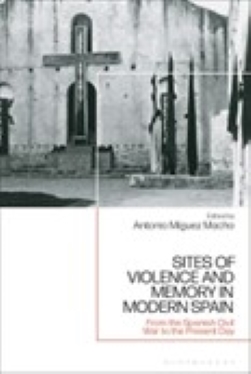 20th-Century Sites of Violence and Present-Day Sites of Memory: A Global Vision from the Spanish Case

en Miguez Macho, A. (ed.), Sites of Violence and Memory in Modern Spain. From the Spanish Civil War to the Present Day, Londres, Bloomsbury Publishing.

In this sophisticated study, Antonio Míguez Macho and his team of expert scholars explore the connections between violence and memory in modern Spain. Most importantly for a nation with an uncomfortable relationship with its own past, this book reveals how sites of violence also became sites of forgetting.

Centred around places of violence such as concentration camps and military courts where prisoners endured horrific forced labour and were sentenced to death, this book looks at how and why the history of these sites were obscured. Issues addressed include: how Guernica came to represent Francoist front-line brutality and so concealed violence behind the lines; the need to preserve drawings made by concentration camp inmates that record a history the regime hoped to silence; the contests over plaques and monuments erected to honour victims; and the ways forging a historical record through human rights cases helps shape a new collective memory.

Shining a spotlight on these important topics for the first time, this book provides a new perspective on one of the major issues of 20th-century Spanish history: the history and memory of Francoist violence. As such, Sites of Violence and Memory in Modern Spain is an invaluable resource for all scholars of modern Spain, memory culture, and public history.